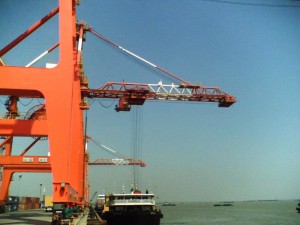 On 17 May 2013, Sales J granted permission and ordered expedition in a judicial review claim that includes two grounds of challenge raising interesting State aid issues. In particular, this is (as far as the UKSALA bloggers are aware) the first time that an English court has been asked to consider the interpretation and application of the GBER.

NTC entered into a contract (a licence) with Jupiter Offshore Limited (“Jupiter”) to allow it to operate a crane on NTC’s land on the Tyneside quayside, providing services by loading and unloading ships. In order to avoid the application of the Public Contracts Regulations 2006 – which, if they had applied, would have obliged NTC to conduct a tender process for the licence – NTC drafted the contract so that there was no binding obligation on Jupiter to actually do any work or provide any services (relying here on the well known ECJ judgment of Helmut Muller and the decision of Hickinbottom J in R (Midland Co-op)).

1. Whether entering into the crane licence without: (i) conducting any tender; or (ii) obtaining an ex ante independent valuation gave rise to unlawful State aid.

2. Whether a grant of £400,000 that NTC currently proposes to make to Jupiter (NTC asserts it has yet to make a final decision on whether the grant should be made) to help fund the crane would also constitute unlawful State aid. This ground raises some interesting points concerning the GBER and incentive effect. NTC argues that the grant would be lawful under the GBER because Jupiter asked for help during the negotiations before entering into the licence, and asserts that this oral request satisfies the requirement under Art. 8 of the GBER that an ‘application’ be lodged ‘before work starts’. SOL contends that: (i) the apparent oral request is not an application for the purposes of Art. 8; and (ii) because Jupiter had already purchased the crane, at a cost of some £1m, before the oral request was made the requirements of Art. 8 are not met.

3. Whether entering into the licence without conducting some form of advertising of the opportunity breached Art. 56 of the TFEU (which has a wider scope of application than the Regulations).

SOL is represented by Joseph Barrett and Jason Coppel QC of 11KBW. Patrick Halliday and Nigel Giffin QC (also of 11KBW) act for NTC. The claim is listed to be heard on 3-4 July 2013.

This entry was posted in Legislation, UK case. Bookmark the permalink.